One of the joys of working at Padlet is that I often learn something new about the world. Padlet is used in over 200 countries, and life is slightly different in each country. Listening to feedback from our members always provides good insight into the lives of people from countries I have never visited or know very little about.

Most recently, Padleteers taught me and everyone else at Padlet about maps. Because of what we've learned, we are changing how we display maps. We will now show localized maps that reflect the norms of the country you access Padlet from.

For context, we launched our map format two years ago, and it has been tremendously successful. People overwhelmingly love our maps, but over time, some users have complained about our maps being wrong.

At first I thought, "How can our maps be wrong?"

But of course they can be 🤦‍♂️. Countries routinely disagree on borders, or what to call certain places.

To give a specific example that many Padleteers shared with us, there is a sea between Korea and Japan. In Japan, it is referred to as the Japan Sea; in Korea, it is called the East Sea. So, how do we label this sea on a map?

The first option is the status quo and is how we have previously chosen to show our maps. As we are learning, it doesn't always work for everyone. The second option would certainly lead to more controversy.

After your advocacy and our research, we feel that the final option is best. So now, if you use the map format, you will see a map that reflects the boundaries and names agreed upon by the country you are accessing Padlet from.

It is not a perfect solution, but given the situation, we recognize that no solution is perfect. Personally, I wish that I could solve all of the geopolitical issues of the world. Seeing as I do not have this power (and probably should not be given that responsibility), showing localized maps seems like the best solution.

Please note that the map is determined by your country of access and not your language. If you have your language set to Japanese but you are accessing Padlet from Korea, you'll see the names that are the norm in Korea. If, for whatever reason, you want to see a different version of the map, you can use a VPN to access Padlet from a different country. In fact, I think this exercise would be excellent to teach students about geopolitics and technology, so feel free to play around with it.

Thanks for this lesson, Padleteers. I look forward to learning more from y'all.

P.S. During my research, I learned something very surprising, which is that many countries don't even agree on how many oceans or continents there are in the world. Some countries teach there are four oceans, and others claim there are five. The ocean above Antarctica is usually the debated one.

P.P.S. For those thinking this is my John Cena moment, don't worry because A) these changes are the exact opposite of one country deciding for the whole world and B) the great firewall will continue to block Padlet maps as long as it blocks Google.

Today we are rolling out an updated design and layout for our dashboard. Here is what the dashboard used to look like: And here is what it looks like now: The biggest changes are visual. The design language we use at Padlet has changed a lot over the years. The 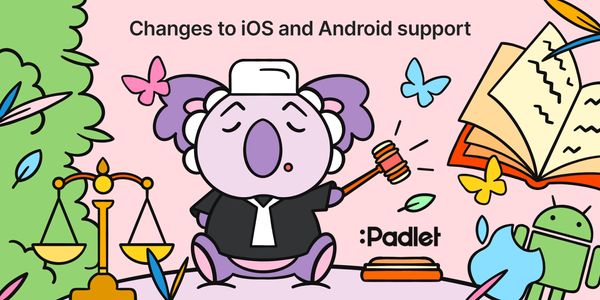 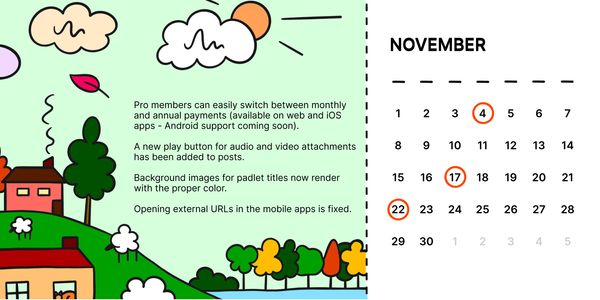 We hope you all had a lovely November. There were a few releases this month as we prepare to finish off the year strong with some big improvements in December. Keep an eye out! New Pro members can easily switch between monthly and annual payments (available on web and iOS